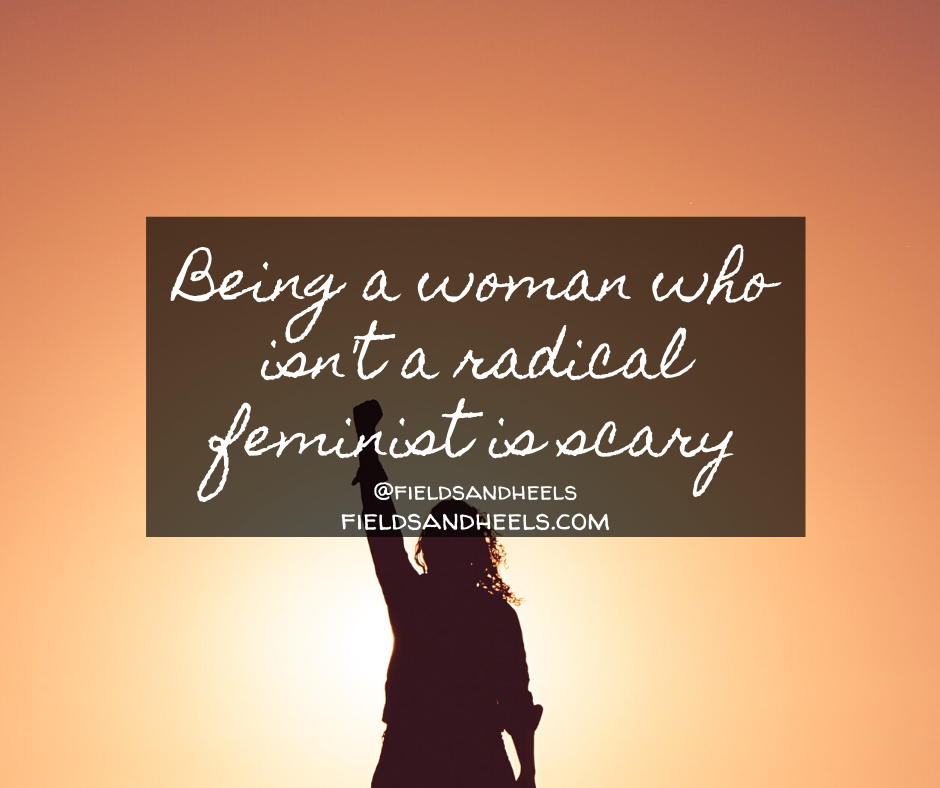 Being a woman who isn’t a radical feminist is scary

Being a woman who isn’t a radical feminist is scary.

Whew.  Just mentioning those things in one sentence will throw many into a defensive frenzy. And that’s been my life as a woman in the 21st century. I’ve never felt more alienated by my own gender than I do today, in one of the biggest pro-female eras of our time.

Hang in there with me for just a few.  It’s scary enough being a woman in 2020 who isn’t a radical feminist. The judgment is harsh (ironically by other women). We live in a culture of empowering females, but my voice is hushed and opinions criticized unless they line up with the radical feminist agenda.

I support feminism, but I just don’t fit in.  I realize this as a woman, a mother of daughters, and as someone heavily involved in the social world.  And as I read all the comments regarding the 2020 Super Bowl half time show.

This year’s Super Bowl sparked the controversial subject of feminism. The half time performance went on with JLo and Shakira shaking their bad selves on stage and putting on a performance that was {honestly} nothing less than I expected. The internet exploded with opinions from both sides. There was a lack of clothing, crotch thrusting, and a children’s choir on the same stage as the strip-pole dancing. It was, as some would agree, a bit inappropriate. But nowadays, I think everyone should question the appropriateness of the half-time shows {especially since the whole Janet Jackson exposure of 2004}.

Every Super Bowl I brace myself for what the half time show might include. Every year.  Knowing this, I then have to approach whether I feel it’s going to be appropriate for my children.  So, I’m not here talk about the appropriate levels of what the show should or should not have been.  I’m here to talk about the response afterward.

-->  Teaching Kids the Art of Appreciation

“Flaunting bodies are a beautiful form of art that every woman has a right to express.” “The half-time show was empowering to women everywhere!” “If I looked that good at their age, I’d be flaunting it too!” “It’s only sexual if you see it as sexual”

These are the posts I’m seeing all over social media regarding the half time show. JLo and Shakira are obviously very talented and beautiful women. They promoted women and the Latino community, these are both good things worth promoting.

But, when did it become okay to twist skewed pro-female and cultural messages into being something positive and empowering?  Not every feminist message is twisted and skewed, but I’m specifically talking about empowering women physically through their bodies and beauty. I want to teach my daughters that being a woman is empowering, but not by wearing provocation clothing or sexualizing themselves.

I want to highlight that this year’s Super Bowl had the first-ever female coach, Katie Sowers.  History was made!  Yet, where are all the social media posts for that?  It’s being drowned by the half-time show drama.

I’ve always been an encourager of empowering women.  I’m pro-female and an advocate for woman’s rights. I myself have overcome so many obstacles in life, my life as a young woman was not easy. In fact, with everything life has thrown at me I should be the biggest advocate for radical feminism.  But, I’m a 21st-century woman who is not radical about feminism. At least not 100%.

I’m raising two teenage daughters in a world surrounded by “pro-female” everything. I’m glad they are growing up in a time where they have more rights than ever before.  Unfortunately, though, it feels like this power is often abused.  It has made me question my own female privilege and has very much confused me when it comes to wanting to promote women without coming across as an activist.  And I see it confusing my daughters, too.

-->  Dear Single Parents & Those Who Love Them

I fear that “feminine power” is often used as an excuse for lack of morale, skewed self-awareness, and naivety.  I have a big problem with this.  I want to teach my daughters to embrace their beauty, but not by promoting it through rich celebrities who can afford plastic surgeries, trainers, stylists, and personal chefs. As a grown woman, I struggle with my appearance and the feeling that I am not good enough.  I can attest to the fact that teenage girls struggle with this at an even greater rate.

So, where is the balance?

For me, the balance starts by knowing its okay to not fit in with this movement. That being pro-female means increasing my opportunities to promote and empower women in positive ways, such as promoting self-respect, respect others and creating healthy opportunities. And by creating ideas and actions that put an end to human trafficking, domestic violence, sexual abuse, and mothers raising children alone. Ways that help women to overcome and to succeed.  And ways that create awareness and education for future generations. I want my daughters to know they are fully capable of changing the world, helping others, and succeeding.

This goes way beyond the half time show, which I’ve used as the most recent example. More shows, events, and opportunities will arise to bring up this controversy {over and over again}.  I just hope that when they do, we as a society don’t continue to forget that being pro-female isn’t the same for everyone.  And that there is so much more depth to it than promoting one’s self.